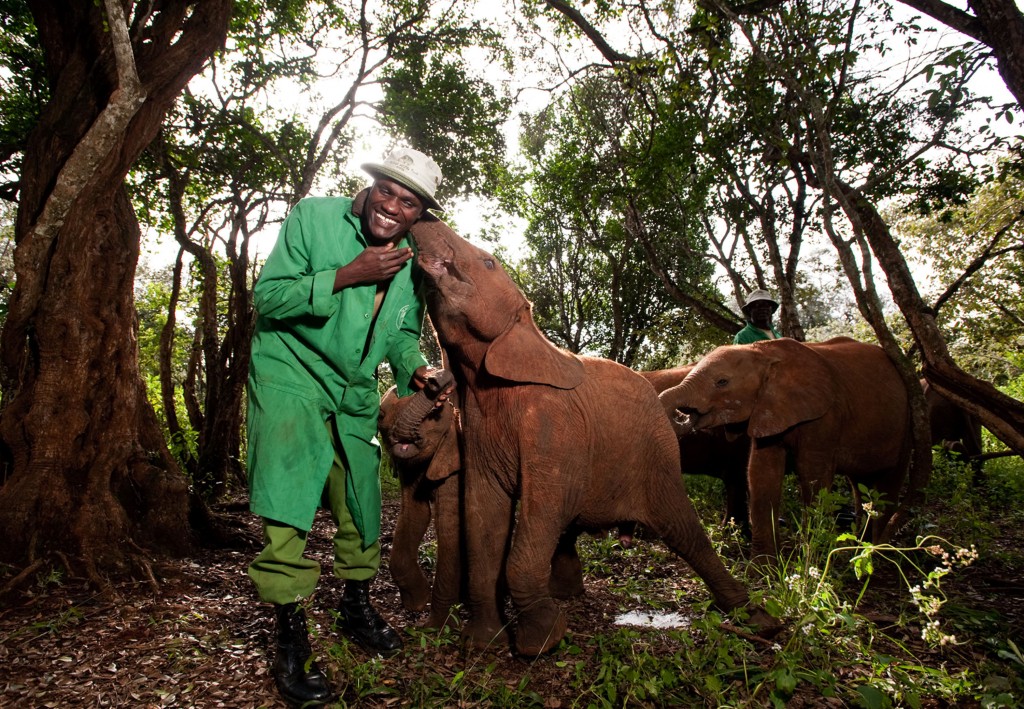 The excellent work continues at the Daphne Sheldrick Elephant Orphange as you will see from the recent report below.

Our Voi Elephant Keeper team received a call from the Kenya Wildlife Service Manyani Ranger Training Academy bordering Tsavo East National Park on the 3rd of November about the plight of a tiny elephant calf.

The ranger trainees had heard distressed baby screams throughout the night and as dawn broke they headed in the direction of the cries to investigate further what the problem could be.  To their amazement they found a tiny calf stuck in a deep sided drying waterhole, unable to extract herself, with no evidence of elephants remaining in the area.  The herd had obviously made the decision to abandon the calf and head to the safety of the Park Boundary well before day break.  The Manyani recruits and rangers rescued the calf and kept her in a stable at the training academy while they alerted our team and waited for our Voi Keepers and milk to arrive on site.  Sadly despite everyone wanting to try to reunite the calf with her elephant family neither her herd nor any elephants for that matter were located in the area so any possibility of this happening was ruled out.

Angela at The David Sheldrick Wildlife Trust headquarters was called and a rescue arranged to collect this tiny baby by aircraft to fly her to the Nursery where she could received the intensive care infant babies require.  We have called her Ashaka, after a watercourse in Tsavo East National Park.  She arrived safely in Nairobi and was immediately introduced to the other tiny babies in our care and soon settled into the fold.

Right from the outset Ashaka has been full of boundless energy.  We estimated her age on arrival to be around the three week mark as she came to us still without teeth.  Ashaka being so young seemed not to miss her elephant family and adapted to her new environment quickly, soon becoming totally attached to both her Keepers and her milk bottle.  A hanging comfort blanket has given her endless hours of enjoyment out in the forest and in her stable which she shares with an elephant Keeper each night, receiving milk 3 hourly 24 hours a day.  She loves to wriggle her trunk around it, resting on it, and taking her milk from under it.   Her stable is next to Kamok’s, and she spends her days in the forest with her tiny elephant friends as we have a few babies her age in the Nursery.

Daphne Sheldrick is one phenomenal woman, rescuing and rehabilitating orphaned elephants. at the Nairobi Elephant Orphanage in Kenya. She has spent 40 years dedicating her life for the elephants and you will see that they treat her like their family.

Daphne recently visited Voi Stockade in Tsavo East National Park, and whilst sitting having a cup of tea with friends, through the bushes arrived Emily and her tiny baby elephant.  Emily was an orphan but was rehabilitated back into the wild from Voi, it was if she came back to show Daphne her new baby, this reduced this very special lady to tears.

It was a very sad day when the death of Daphne was reported.  Her daughter and family will continue the excellent work Daphne carried out.